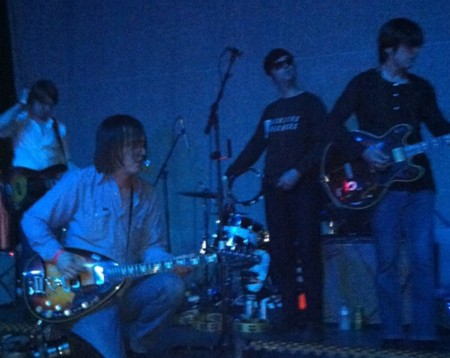 Walking through the courtyard at the 2012 Austin Psych Fest early Sunday afternoon, I noticed Anton Newcombe standing off to the right, near one of the vendor’s tables. Not wanting to intrude, I intended just to continue on my way. As I went by, Anton glanced at me as if he thought that he knew me from somewhere. Realizing that the Dead Skeletons’ t-shirt that I was wearing had precipitated the mistaken identification, I stopped, pointed to the mantra-ringed skull logo and said, “Product of Iceland!” Anton spoke for a few minutes, presenting a short lecture on Tibetan Buddhism before saying that he had to run. It was going to be an interesting show!
— — —
The Brian Jonestown Massacre filled the stage at Emo’s East with instruments and musicians – nine for most of the show, eleven with the sitar player and the guest second tambourine player. A small crowd of friends, family and members of other bands framed the back.

Seeing Anton’s energetic direction and the rest of the band’s relaxed response, it seemed as if the Our Gang Little Rascals were playing, but with Nietzsche as a boy taking the place of Spanky, the scamps’ leader. The lack of pretense and gimmicks also could have given the wrong impression of something rough-hewn or amateurish, but the perfection of the performance proved that successful art is only that much better when not peppered with stunts.

The Psych Fest’s preceding groups all played for just around sixty minutes each. The audience hoped that the Brian Jonestown Massacre, as it was the final act, might be onstage at least a little longer. Winding up playing for well over two hours, they certainly didn’t disappoint their fans.

Maybe halfway through, Anton announced that he had to pee and asked Joel to talk about his new record. Joel at first appeared not to understand the request and Anton then told him to keep the audience busy for a few minutes. Joel, classy guy that he is, resisted the temptation of self-promotion and instead lauded the event. When Anton popped back onstage, BJM returned to high gear.

As the two hour mark approached, someone from the club’s staff yelled for the band to go home since he had to sweep the floor. Philistine duly ignored, the musical magic kept going. An Emo’s manager entered stage left and spoke with a member of the band, probably asking how much longer the concert was to last. Satisfied with the answer, the Emo’s guy made his exit. After two hours was well past tensed, Mr. Emo’s returned, this time talking fast and gesturing in an agitated manner. (Was the venue now open past the legal closing time?) As if not noticing the Emo’s issues, Anton continued playing the guitar and began to direct his band: “Remember the chords? Keep that riff going!” He then stood directly over the drummer, pointing out to him what to do. Anton walked over to an amplifier and placed a guitar on top. He kneeled in front of the equipment and began to manipulate the dials. Like some sorcerer out of Lovecraft, Anton called up spirits from the air and compelled them to combine their voices into a chorus of banshee screams and howls. The lights went out. For maybe a minute, Anton continued to conduct his demon orchestra before standing up to leave, disembodied souls still calling after him in the dark.

Anthony Olszewski has written on a wide variety of topics: cage birds, tropical fish, popular culture, the poetry of Amiri Baraka and a chapter on genetics for a veterinary text book, as a small sample. He worked as an editor at a magazine produced by TFH, the world's largest publisher of pet books. Anthony Olszewski is the author of a booklet on Hudson County history, Hudson County Facts, and a book of short stories, Second Thief, Best Thief, that are sold on Amazon. Anthony Olszewski established PETCRAFT.com in 1996. A pioneer on the Web, the Site continues to provide unique information on a range of companion animals, focusing on birds and fish. As a community service, he operates Jersey City Free Books. Anthony Olszewski was born in Jersey City, NJ (Margaret Hague Maternity Hospital, 1956) and is a member of Mensa.
View all posts by Anthony Olszewski →
This entry was posted in Uncategorized. Bookmark the permalink.